Of success and failure ....

What a busy weekend it's been at the TG&C household. Gardening, cooking, oh and housework. Borrrrring!
Back to the fun stuff.
Where to begin. At the beginning, I suppose.
When we bought this shack, there were elements that were pretty ordinary - fences, the soil was crapola, no vege patch (unimaginable!) etc, etc.
So one of the first things we did was install some water tanks. Three in fact. This might seem like a lot, but it's not really. Sure, they fill up quickly, but even if full, they're don't hold enough to see us through the dry season. Water from this trio is used on the vege patch, once a week the "back paddock" gets a watering through the Mr TG&C installed irrigation system, and we use it for drinking water too.
We know this is controversial, but we both grew up on farms where rainwater was de rigeur. My folks even had a thunderbox when I was little. But that's another story.
So we're happy with and love our water tanks. 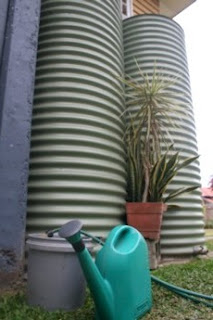 One of the other things we got into is compost. Compost, compost, compost. We have one of those square, plastic, movable things which isn't ideal, but it does the job for now. With the heat we're experiencing at the moment, the contents are breaking down very quickly. But once it's filled we have to put our kitchen scraps elsewhere, so it gets buried. Which is a bit like running the gauntlet as there is a certain grey person who lives here, who likes digging up smelly things. No, not Mr TG&C. 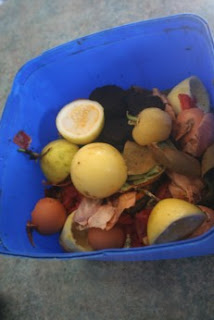 Our kitchen scraps bin usually gets emptied a couple of times a week and we put everything into it - even onion skins. I know there is divided opinion about this, but we've not noticed a problem. The only things that don't go in the compost are meat and dairy products. We even chuck prawn and other seafood scraps in there. Provided the grey digging person can be restrained sufficiently. 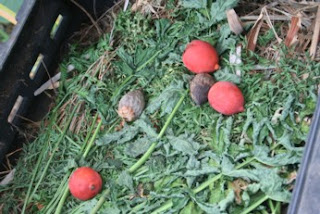 In other garden news, Mr TG&C apparently meant to put our old mop in the bin the night before bin day, and was frustrated that he forgot. So I said, that's just as well. We can use it as a stake! Ergo, it's now a stake. Recycling at it's best. 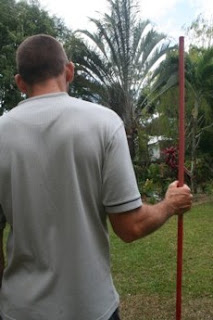 So here is a snap of some beautiful tomatoes, ripening on the bush. Well, they were until this morning when we noticed that one had been totally decimated by birds and big chunks had been eaten out of another two. I think that's happened to a nearby capsicum too. It's gone! Usually when the grey person chews capsicums (and he is QUITE partial to them) there is a bit left. Not this time. And I cannot find any scraps around the garden. Are the mynah birds getting hungry? 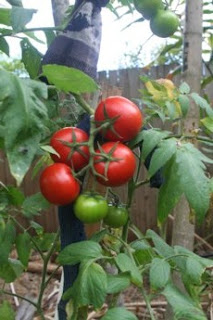 Meanwhile, in the kitchen, yesterday I did my first ever vegetable soup. I'd had to buy celery for the green tomato chutney and thought "what can I do with the rest of this?" So vege soup it was. Went down the vege patch and harvested a carrot and parsnip. Already had onion and garlic in stock, so away we went. And it was bloody good! Like, REALLY good. Mr TG&C had some for lunch today and reckoned it was edible. I think.
Anyway, this afternoon I tried a zucchini relish. Fail. The recipe was just ... bizarre. It come from Mother Dearest and I don't know if she's ever tried it, but it was not a roaring success. Next time I'll turn to Dr Google.